living with a ghost? 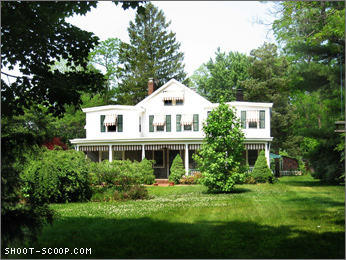 In the spirit of upcoming Halloween, I figured I’d share my own ghost story. This is going to sound crazy, so I’m going to preface it with telling you I’m usually a skeptic when it comes to such things and allow you to draw your own conclusions.

When I was younger I used to be a huge horror film fan. Not the Hostel type (nasty limb removal), more like, The Changling type (creepy ghostly spirit movies). I think I had seen the Exorcist about 40 times by the time I was 12. My cousin’s and I used to hang out and watch scary movies at my grandparent’s house in Bay Ridge, Brooklyn. That all being said, I grew up thinking that ghosts are, after all, in movies only and everything else is just a figment of our imagination, right? Energy in the brain that creates *thoughts* of the supernatural, resulting in possible coincidental occurrences, or…completely imaginative occurrences?

I’ll get to the point.

There have been some strange things happening at the Farm lately. Period. I’m just going to state the facts as I know them.

About a year ago, I’m painting the trim at the bottom of my main staircase in the dining room. I know it was about a year ago as my husband had just finished some of the trim work in the dining room (just ask if you want full access). He is upstairs with daughter number 1 and napping (this was when she was still taking naps – sigh, those were the days!) daughter number 2 is napping as well. So. The house is quiet and I’m enjoying the stillness and painting the trim.

I suppose I’m painting for about 30 minutes or so, when suddenly, I hear footsteps directly above where I’m painting in the upstairs foyer. My husband wears suits to work (sometimes 😉 ) and has…you know…your average Kenneth Cole Dress Shoes that he wears to work or with jeans sometimes. It sounded just like them, walking directly above my head. I stop painting and say his name in a loud whisper, to avoid waking any sleeping children. No answer. Footsteps stop. Now I’m thinking to myself – this is ODD what is he doing up there? He obviously can’t hear me because he probably walked back into the master bedroom (of the three access points to the master suite, I’m referring to the door closest to the entrance to the attic).

There’s one thing I’ll say about plaster walls, they’re fabulous noise insulators, which can be both a good and a bad thing.

My curiosity gets the best of me. I proceed up the stairs to find him out cold with my oldest daughter. It wasn’t him. But I heard footsteps…and I don’t care what anyone says. My husband brushes it off (as most would, and to be honest, had it been me – I probably would’ve had it been him as well) and I let it go – chalking it up to be an old house noise.

Approximately a year has gone by without anything. The ONLY thing I had ever heard were those footsteps. About 6 months ago, the previous owner, rather, 1/2 of the previous owner (ex-husband) dropped by one day to see the house. He had relocated to one of the Carolina’s and had remarried. Had not been inside the house for 2 years or so as his ex-wife handled the selling of the home (and did a mighty fine job I must say)!

He proceeded to give me all sorts of juicy facts (none of which are ever enough, quite honestly, I can listen to old tidbits about this house forever.) Which included that our back patio is actually an old foundation for a slaughter-barn, that underneath a large pine tree is an old brick foundation that they partially uncovered while transplanting that very tree. They used some of the bricks to fill in the walkway in the front and on the side.

(behold…the walkway…taken from my point & shoot prior to our purchase). 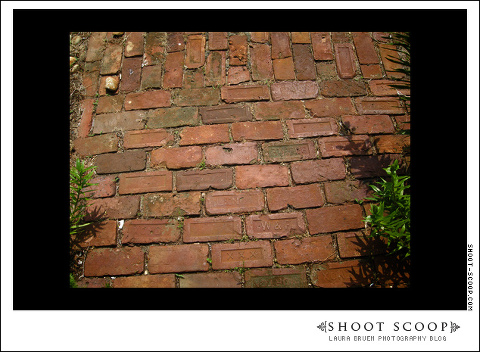 The back patio. I’ll have to get another shot of it to show the tree to the left literally growing OUT of the foundation AND the old drainpipe. 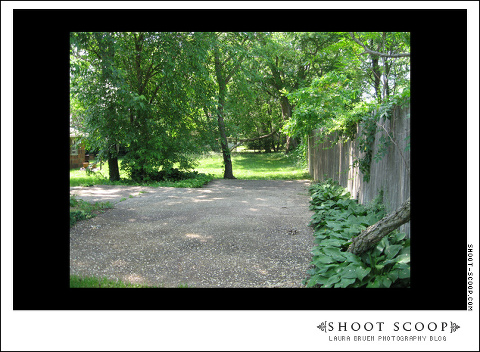 In addition to these little tidbits of info, he also proceeded to ask me if I had any company in the house aside from “us”. I instantly told him about the footsteps and he nodded and proceeded to tell me a story of how his son would continuously be bothered by “something” and that “oh..they’re here alright”.

OK. Well, I know if you look at the house in this light, it can certainly be creepy. Again, we haven’t even toured the entire house on this blog yet so once I get into it, you’ll see what I’m talking about.

The matter at hand.

This past weekend, my husband and I attended a wedding for our very good friends in Long Island at The Swan Club. My mother-in-law and sister-in-law babysat our two children overnight. (Which we are *extremely* thankful for – not having to drive 2 hours home is bliss. It’s amazing once you have children you forget how to sleep past 8 AM.)

We come home on Sunday to hear two stories from each:

Sister in Law hears footsteps outside the entrance to the sitting room AND then down the main stairs. Note: We have baby gates down the main staircase – they haven’t been opened. She assumes that it’s my Mother in Law going to the bathroom downstairs but *why* would she be doing that after all?

Mother in Law hears pitter patter of little feet, gets up to check, thinking it’s one of my daughters awake, checks to see both kids are OK, heads back to bed. Sister in Law sees Mother in Law is upstairs, but swears she heard the stairs (they creak, they’re old): 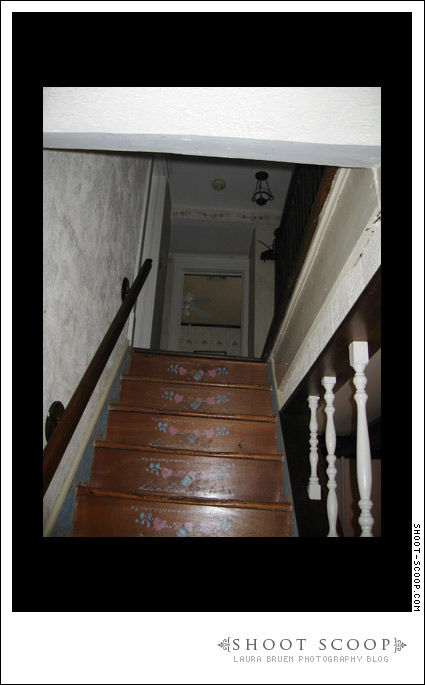 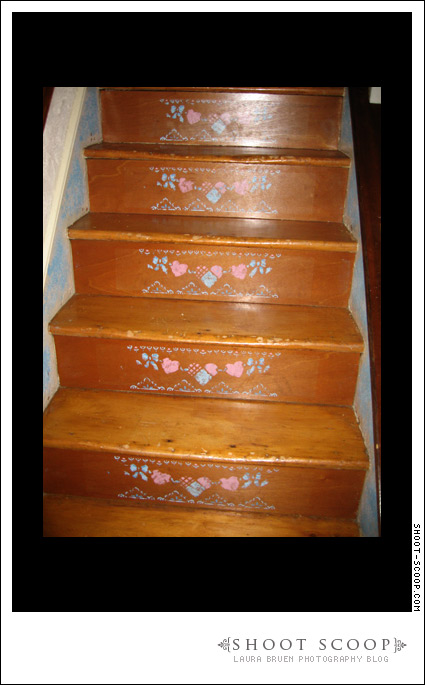 Neither of them talk about it until the next morning (Sunday).

We have two dogs. One male, one female. My female is more sensitive to sounds, light, sirens, etc. Since the time we moved into the house, they both sleep in the sitting room. Every night.

Monday 5:am, my female dog gets up and will not let us sleep. She’s crying and moaning like she wants to go downstairs (this NEVER happens). I get up, take the dogs out, come back up. No issues.

Monday 9 am. My 4 year old has off from school. She comes into my office and says “You called me mommy?” (I didn’t) – I dismiss it.

Tuesday at 3:30 AM my female dog gets up and will not let us sleep. She’s crying and moaning like she wants to go downstairs again. We get up – there is NO WAY she needs to go out, after all, they never go out this early and thinking the first time is an exception, we stick to our guns. Tuesday, 4:30, 5:30, constant whining.

Tuesday at 8:30 breakfast time, in kitchen. “Mommy who keeps saying my name? Is that daddy?” My 4 year old is looking around. Now…this is starting to get a bit creepier.

Wednesday at 3:30 AM. Female dog up again, every hour. Something just isn’t right with her.

I call the old owner. She confirms the events and states that whatever “it” is communicated with her oldest as well. We compared bedroom notes, to see if is a “bedroom” thing but her son had a different bedroom than my daughter.

Sigh... I’m fine with it all provided that it lets us live in peace but I have to admit, I’m a bit creeped out by the entire thing while being cool with it at the same time 😉 – after all, who has their own ghost?

Will post updates as I get them – fingers crossed that there is nothing more! But Barbara, if you visit this post, please write down anything else you may remember here!

Posted in the farmTags: ghosts, haunted house, superstition, the farm

« cell phone shot of the dayour farm: our well »